A member of the recent U-17 and U-20 national teams, midfielder Sarah Kinzner is about to embark on a new journey with the national program. She’s part of a Pan American Games roster that’s opening its tournament Saturday versus Ecuador.

The 17-year-old — who is a native of Calgary and a graduate of the Calgary Foothills SC program — will also begin her college career later this summer as a freshmen at the University of Colorado Boulder.

She spent the last few months suiting up for Foothills WFC, a women’s team that’s taking part in an exhibition season in hopes of bringing the W-League to Calgary.

We caught up with Sarah before she headed to Ontario for the Pan Ams:

What was your reaction when you found out you were named to the Pan American roster?

It was such an incredible day. When it got announced, I was so excited. Since it’s in Toronto it’s going to be great playing in Canada, similar to the World Cup. We’ll have that home crowd advantage. I’m really excited to play in it.

And a lot of players are returning from last year’s squad that took part in the U-20 Women’s World Cup.

It’ll be really nice to see them again, because I haven’t seen them in awhile. Having them there really raises my level of play and it’ll be a great opportunity for me to improve as a player. I’m so excited to be able to see them all again.

Last year, your group was coached by Andrew Olivieri, but since he’s moved on, what do you know about working with coach Daniel Worthington?

I’ve been to a few camps with Danny and he’s a great coach. He brings a lot of energy and he’s very positive. Every single camp, he’s helped me improve so much. Andrew did that previously and it was sad to see him leave, but he had to do what he wanted to do. I think the team is strong with either of them.

What are your expectations going into the Pan Ams?

With the Canadian program, every single camp works on the DNA and what we can do to improve, get ready for the future basically. I think the tournament is going to be a great learning experience. We’ll get that extra tournament expertise and compete against some strong teams from North and South America. It’ll be some great opposition and I feel like it’ll be a good experience to get us ready for the next levels to come. 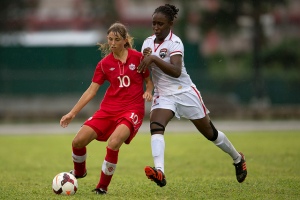 What are your thoughts ahead of joining the University of Colorado and the transition to college ball?

I’m really excited for college. Honestly, I was pretty nervous thinking that school and stuff is going to be hard, but I’m so grateful for the opportunity. I’ve already went down and visited. I’ve met a lot of the girls and it’s going to be a good atmosphere. I’m just going to grow from there. It’s beautiful there. You’ve got the mountains and it’s really similar to Calgary.

Just focusing a little bit on Calgary, how have you enjoyed the exhibition season with Foothills WFC?

You can tell after every single practice, we’re connecting more as a team and after every game. We’re always improving. By the time W-League comes around next year, I think we’re going to be ready.

Where are you most comfortable playing on the field?

I can play on the right side, but I usually play central midfield. I’m comfortable pretty much anywhere. I just want to get on the ball and do some tricks. With this team, basically, anyone can play anywhere and we’re here for the love of the game. Everyone is having fun. It’s pretty amazing.

Sandra Prusina is a journalist and broadcaster based out of Calgary, Canada. She has covered women’s soccer since 2010. She’s also a segment reporter for Olympic Broadcast Services, traveling to Vancouver, London and Sochi to work for the host broadcaster.