One of three Canadians named to the 2015 MAC Hermann Trophy watch list, she’s entering her senior year with Texas Tech. The forward is coming off a great junior season where she was named NSCAA first team All-American and Big 12 Offensive Player of the Year. She already holds a number records at Texas Tech, including goals (43), game-winning goals (16) and shot attempts (327).

On the national level, she’s coming off a strong showing at the Pan American Games and was one of the team’s standout performers. She’ll be looking to secure a permanent spot on the senior side as preparations begin for Olympic qualification in early 2016.

She’s already made her mark as one of the game’s best emerging talents, winning the 2015 FIFA Women’s World Cup Best Young Player Award earlier this summer, where she was steady as a rock on the Canadian back line.

The accolades are rolling in for the star centre-back at the college level too, being named to the NSCAA/Continental Tire All-America First Team as a sophomore. She was also voted the WVU’s Team MVP and Team Defensive MVP by her peers. She joins Janine Beckie and college teammate Ashley Lawrence on the 2015 MAC Hermann Trophy watch list. Along with her strong play on the pitch, she’s also been impressive in the classroom making the Dean’s List, Garrett Ford Academic Honour Roll and Big 12 Commissioner’s Honour Roll.

Looking to build on an excellent sophomore season at WVU, she’ll be looking to embrace a leadership role that’ll come along with playing important minutes. The midfielder started all 20 matches in 2014 and raised the bar during the post-season when she had assists on both goals in WVU’s victory in the Big 12 Championship quarterfinal. That put her on the map in the NCAA and is a reason she’s on the 2015 MAC Hermann Trophy watch list.

She was one of Canada’s standouts at the 2015 FIFA Women’s World Cup, going toe-to-toe in the midfield with some of the world’s best and scored her first senior goal versus the Netherlands in Montreal during group stage play. 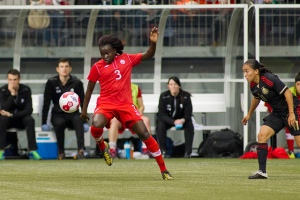 The Ontario-born freshmen opens her NCAA tenure close to home in Michigan. She’s following in the footsteps of Canadians Nkem Ezurike and Shelina Zadorsky, who both had storied careers for the Blues. It’ll be interesting to see how much playing time she gets in her first year and if she’ll suit up as a defender. Her tremendous speed could be an asset in the midfield, especially down the flanks.

Although she took a break from the national program earlier this year, a spot could certainly open up for her as the team goes through a transitional phase leading up to the 2016 Olympic qualifications, especially with an aging back line.

The forward has a nose for the net, holding the school record for career goals with 17 in her two seasons at the college. She started all 20 games for LSU as a sophomore and now as a junior will take on a leadership role along with her offensive duties. The balance shouldn’t be an issue, since she’s excelled at every level she’s played. Basically, she’s a coach’s dream when it comes to a pure striker.

While a return to the national program remains to be seen, her scoring prowess would certainly be a welcomed addition. She hasn’t attended a national camp since early 2014 despite a number of invitations.

Sandra Prusina is a journalist and broadcaster based out of Calgary, Canada. She has covered women’s soccer since 2010. She’s also a segment reporter for Olympic Broadcast Services, traveling to Vancouver, London and Sochi to work for the host broadcaster.