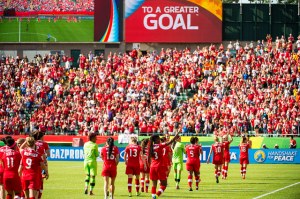 As Canada prepares for a December tournament in Brazil and 2016 Olympic qualifications, John Herdman and his coaching staff have brought together a group of players for camp in Vancouver.

Striker Summer Clarke returns from an absence from the national program.

The following players currently competing in NCAA play may enter the camp and competition dependant on the results of their current season:

“We’ve reviewed and analysed the team post FIFA Women’s World Cup, so we are in the process of building towards the Rio Olympics,” John Herdman said in a Canada Soccer media release. “We’re looking at this camp as an opportunity to assess a group of young players from our EXCEL program, and from the Pan Am Games.

Sandra Prusina is a journalist and broadcaster based out of Calgary, Canada. She has covered women’s soccer since 2010, including the 2012 Olympics and 2015 FIFA Women’s World Cup. She’s also a segment reporter for Olympic Broadcast Services, traveling to Vancouver, London and Sochi to work for the host broadcaster.