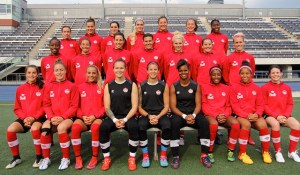 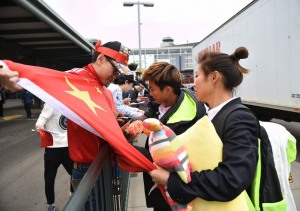 Canada and China’s most recent meeting was at the Four Nations Tournament in January, where the Canadians came out on top 2:1. Christine Sinclair scored the brace in the win.

Canadian Jessie Fleming is the fifth youngest player at this edition FIFA Women’s World Cup. To counter that, Canada has the third oldest team at the tournament.

Canada’s most experienced player is captain Christine Sinclair (223 caps), followed by Diana Matheson (166) and Rhian Wilkinson (163). For China, Gu Yasha (87) has the most appearances.

Ukraine referee Kateryna Monzul will be in charge of the match. Ukraine’s Natalia Rachynska and Sanja Rodak of Croatia will be the assistant referees. France’s Stephanie Frappart is the fourth official.

This is the first match of the group stage for Canada. They’ll face New Zealand on Thursday evening in Edmonton.

Keep your eye on Christine Sinclair. She’s five away from tying Mia Hamm for second most international goals at 158. American Abby Wambach continues to be in first place with 182.

“They’re just returning to play. The goal is to get them back in this tournament. That’s why we’ve kept them in the squad. Wilkinson, she’ll be back a bit quicker than Matheson. And Matheson, we’ve got a return to play plan, hopefully last game of the first round. If not, we’re into the knockout and that’s where we expect Diana to come back.”

John Herdman on the team’s vibe ahead of the opener:

“No, they’re really chilled out. I think just being at home’s been nice for them. I think they’re less nervous now because they’re just in familiar surroundings.”

“Are we the favourites for the event? No. Can we get on a roll in this tournament with our country behind us? Yes. This group of women believe they can go all the way. They’ve got a greater purpose than any other team at this event.”

“She’s a big game-player, we all know that about Mel. She got her four goals at the Olympics which I think changed the Olympics for us because it took a bit more pressure off Christine, it took the tactical focus off Christine for the opposition teams. But one thing you know with Mel, when the big games come she’ll deliver for you.”

“He’s pushed me as a human being every single day. It’s about being the best people that we can be first and then obviously doing what we need to do on the soccer pitch.”

About the author:
Sandra Prusina is a journalist and broadcaster based out of Calgary, Canada. She has covered women’s soccer since 2010. She’s also a segment reporter for Olympic Broadcast Services, traveling to Vancouver, London and Sochi to work for the host broadcaster.